KUCHING: The Sarawak Covid-19 Immunisation Task Force has confirmed that the AstraZeneca vaccine will be offered to eligible Sarawakians on a voluntary first-come, first-served basis.

The task force said it had decided to allow the use of the AstraZeneca vaccine to complement the state's vaccination programme following a review and recommendations by the Sarawak Covid-19 vaccine advisory group (Scovag).

"The vaccine will be supplied to Sarawak through the coordination of the National Covid-19 Immunisation Task Force.

"Separate designated vaccination centres will be set up for this purpose and will be announced in due time," the task force said in a statement on Tuesday (May 18).

This comes after Khairy Jamaluddin announced on Monday (May 17) that the AstraZeneca opt-in programme would be extended to Johor, Penang and Sarawak when the second round of registrations starts on May 23.

The coordinating minister for the National Covid-19 Immunisation Programme said priority would be given to those aged 60 and above, while any appointment spots not taken by senior citizens would be opened to those below 60 on May 26.

Sarawak CITF said Scovag had earlier recommended the use of the AstraZeneca vaccine for those above 60 in urban areas, based on very low overall severe adverse events and the high benefit-to-risk ratio among senior citizens.

However, it said this evidence-based recommendation had to be balanced with public hesitancy about the vaccine.

It noted that about 8,000 people were reported to have cancelled their online vaccination registration following the Federal Government's announcement that the AstraZeneca vaccine would be part of the nationwide vaccination programme.

"Based on the disturbing lesson learned through the rejection rate of vaccination registration, Sarawak CITF had opted to not receive the AstraZeneca vaccine for its Covid-19 vaccination roll-out plan.

"The Sarawak government did not want the Covid-19 vaccination programme in the state to be jeopardised by fear and hesitancy due to the use of the AstraZeneca vaccine," Sarawak CITF said.

The task force also cited the results of an online survey by a local paper on the reception of the AstraZeneca following the first round of the opt-in programme in Selangor and Kuala Lumpur, which saw all 268,000 doses booked within three hours.

It said 69.4% of 1,037 respondents were in favour of giving Sarawakians the option of being vaccinated with the AstraZeneca vaccine, but only 52.9% out of 1,040 respondents were willing to receive the vaccine.

"Given this new insight and willingness of the people in Sarawak to have the choice of the AstraZeneca vaccine, Sarawak CITF has agreed to let the vaccine be used in Sarawak on a voluntary, first-come-first-served basis by appointment," it said. 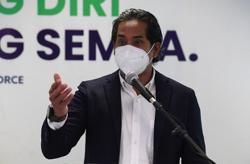