NILAI: Seventeen foreigners believed to be factory employees, were detained after they allegedly crossed a concrete barrier and barbed wire fence put up by the authorities to prevent interstate travel along the Nilai-Kajang border.

Nilai OCPD Supt Mohd Fazley Ab Rahman said the suspects, aged 20 to 42, were arrested during an operation along the border on Sunday morning.

The foreigners, who wore the same collared T-shirts, are believed to be employees of a factory near here.

“We believe they came from the Bukit Mahkota area in Bangi, Selangor, and were heading to the Arab Malaysian Industrial Park in Nilai, Negri Sembilan.

“They were caught by a police team conducting patrols for Covid-19 standard operating procedure compliance in the area, ” he said.

Supt Mohd Fazley said the suspects were taken to the Nilai police station for questioning.

The case is being investigated under Section 427 of the Penal Code for committing mischief, Section 447 for trespassing and Section 22(b) of the Prevention and Control of Infectious Diseases Act 1988.

On a separate matter, Supt Mohd Fazley said police had recorded a statement from a 42-year-old Twitter user suspected of spreading fake news that police had issued a RM25,000 compound to a house owner in Nilai Impian for holding a Hari Raya open house.

The suspect, a manager at a book publishing company in Bangi, also allegedly tweeted that guests who attended the open house on May 13 were fined RM5,000 each.

He said the account owner, identified as “No War But Class War @Icsmxms”, went to the district police station on Sunday to have his statement recorded.

“We have also seized a gadget which he allegedly used to upload the statement. The suspect was then released on police bail, ” Supt Mohd Fazley said.

The matter is being investigated under Section 505(b) of the Penal Code for making statements that could lead to public alarm and distress, Section 233 of the Communications and Multimedia Act 1988 for misusing the social media network and Section 4(1) of the Emergency (Essential Powers)(No 2) Ordinance 2021 for spreading fake news.

He advised the public to exercise caution when making comments on social media.

He said a picture uploaded together with the post merely showed police conducting house-to-house inspections on the first day of Hari Raya at the Nilai Impian housing area. 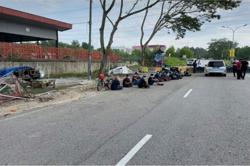