KUCHING: Sarawak Chief Minister Datuk Patinggi Abang Johari Tun Openg will seek an audience with the Yang di-Pertuan Agong on the dissolution of the state legislative assembly, but the date will be at His Majesty's discretion as the Emergency is in place until Aug 1, says Gabungan Parti Sarawak (GPS) secretary-general Datuk Seri Alexander Nanta Linggi.

He said the state assembly would be dissolved on a date to be decided by the King in consultation with the Sarawak Head of State in view of the current state of Emergency.

Under the Sarawak Constitution, he said, the state legislative assembly's tenure is due to end on June 6, five years from its first meeting on June 7,2016.

"In normal circumstances, it would have been dissolved for the return of the rakyat's mandate to democratically elect their government in an election.

"But we are under a health Emergency until Aug 1," he said after attending a GPS supreme council meeting chaired by Abang Johari on Saturday (May 15).

Nanta said the state constitution's provision on the dissolution of the legislature had no effect by virtue of the Emergency Ordinance 2021.

Nanta also said holding an election was not a priority of the state government at the moment as Covid-19 cases were still high.

"The government considers Covid-19 as a serious threat and people's lives are very important.

"To hold an election during Covid-19 is risky and we may not want to be seen as putting the people's lives at risk," he added. 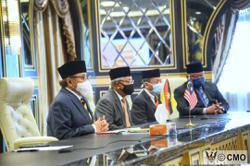