Home sweet home: A Wildlife Rescue Unit member releasing Klowyi into the sea, witnessed by Sainsbury (in white shirt) and Sabah Park rangers (in the opposite boat).

KOTA KINABALU: A rescued female juvenile green turtle, diagnosed with floater syndrome probably due to ingesting plastics or having bacterial infection, has been released back into the sea by the Sabah Wildlife Department’s Wildlife Rescue Unit.

The turtle, nicknamed Klowyi, was seen floating and unable to dive in Kudat waters a month ago, and was rescued by a Kudat Turtle Conservation Society member who alerted the unit.

During rehabilitation, the turtle was placed at the Clownfish Discovery Centre in Shangri-La’s Tanjung Aru Resort here, where it was nursed back to health by the unit’s veterinarians and rangers.

She was released back into the sea near Sapi Island yesterday.

Department assistant director Dr Sen Nathan said Klowyi was suffering a serious condition due to the excess accumulation of gas in the body, making it unable to dive for food or protection. 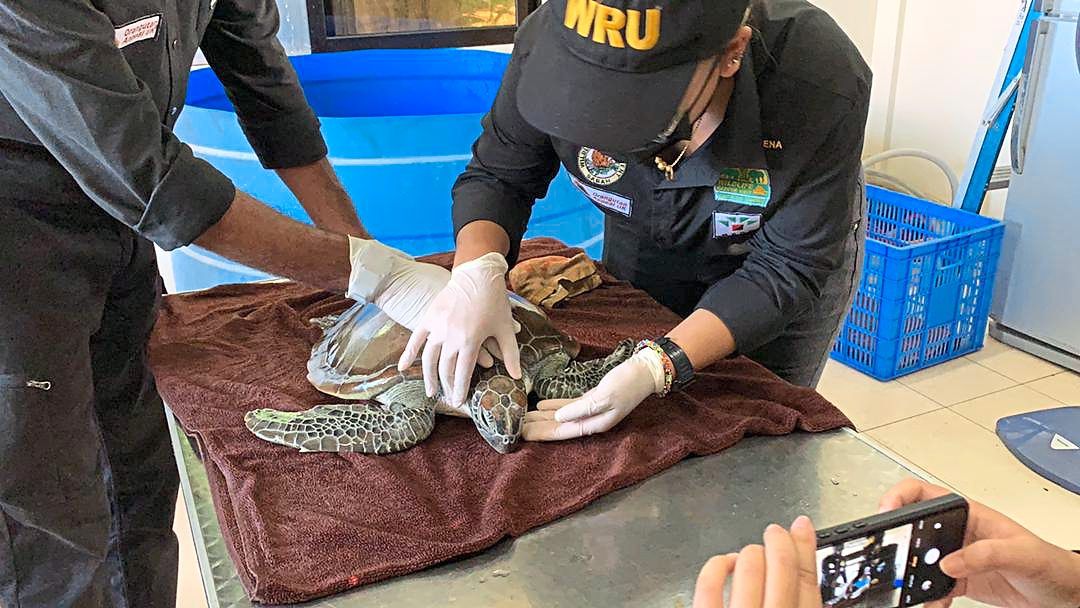 Good to go: A veterinarian checking Klowyi one last time before her release.

“This condition may be due to the ingestion of plastics, which caused an obstruction and accumulation of gas in the coelomic cavity, or caused by bacterial or viral infections of the intestines or even the lungs.

“She could have starved to death and was at greater risk of being hit by a boat as she was unable to dive, ” said Sen in a statement.

Department director Augustine Tuuga said if not for the professionalism and hard work of veterinarians and rangers at the unit, Klowyi would probably have not survived the ordeal.

“Now, she is completely healed and can be released back into the wild, ” he said, thanking the resort’s team and general manager Timothy Sainsbury for their assistance.

He also hoped that both the department and the resort could continue collaborating on conservation efforts focusing on marine wildlife in Sabah.

Witnessing the turtle’s release, Sainsbury said he was delighted that the resort was able to play a part in the month-long treatment of the turtle.

He said the resort had been running a marine conservation programme for seven years under Sanctuary – Shangri-La’s Care for Nature Programme to help with the preservation and protection of the Tunku Abdul Rahman Marine Park as well as its species such as the clownfish.