PETALING JAYA: Manning a roadblock despite a torrential downpour that saw traffic cones and tents being blown away has garnered the Petaling Jaya police praises by Malaysians over their unwavering dedication to serve.

A video, which was posted by the Petaling Jaya district police on Facebook on Sunday (May 9) night, showed police officers at a roadblock at the NKVE Damansara toll plaza frantically removing traffic cones that were blown towards cars in order to avoid an accident.

Other police officers were seen trying to hold on to the tent at the roadblock, which was being blown by the thunderstorm, while several officers ran to remove cones from obstructing the traffic.

Cars were also seen dodging police officers and the cones as they headed towards the NKVE toll plaza in Damansara.

The 27-second video had the caption "Your tireless efforts are not going unnoticed. Thank you," as they urged Malaysians to abide by SOPs at all times in order to bring down Covid-19 numbers, which has seen a surge in recent days.

The video, which has since garnered more than 80,000 views on Facebook and over 1,000 reactions, was well-received by Malaysians, as many took to social media to pay tribute to the sacrifices of the police in dealing with the Covid-19 pandemic.

"May god bless you all for your hard work and sacrifice. Thank you," commented Pauline Pam.

Other Malaysians also prayed for the wellbeing of the police officers in the Covid-19 pandemic.

On Sunday (May 10), Malaysia recorded its highest death toll of 26 since the Covid-19 pandemic began last year.

The movement control order has been imposed in several districts in Selangor, Kuala Lumpur, Penang, Perak, Kedah, and Pahang to address the recent surge in Covid-19 cases.

Senior Minister Datuk Seri Ismail Sabri Yaakob had also said that interstate and inter-district travel will be banned from May 10 to June 6.

During the same period, all social, education, and economic activities involving large gatherings are also banned.

However, Ismail Sabri said the decision will be reviewed again in two weeks. 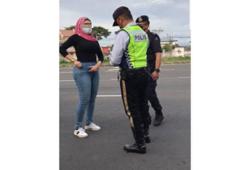