KLANG: Mass screening to detect Covid-19 infections among local communities will start in Selangor from tomorrow.

Selangor Mentri Besar Datuk Seri Amirudin Shari announced earlier this week that screening would be held at all 56 state constituencies.

The screening would be conducted by Selcare, which is the administrator of the Selangor state government’s healthcare programme Skim Peduli Sihat.

Selcare manager Mohd Noor Md Nasir said the exercise would first start in the Hulu Langat district, with the Kajang constituency followed by the remaining constituencies in the same district.

“We will be carrying out the exercise over 28 days, screening two constituencies daily, ” he said.

Concentration, he said, would be held at hotspots in the respective constituencies.

According to Mohd Noor, Selcare was expecting to screen 500 people at every constituency.

A team of 40 people, including doctors, nurses and non-clinical personnel, will be involved in the screening exercise.

The state government has allocated a budget of RM6mil to screen 50,000 Selangor residents.

She said the exercise was part of the state government’s effort to conduct surveillance and community screening to identify positive cases in each constituency.

“We cannot have people who are Covid-19-positive walking around, ” Dr Siti Mariah said.

“I was quite disappointed when someone who underwent the swab test recently did not quarantine themselves until the results were out.”

She said those who were waiting for the results must wear a mask at home and isolate themselves.

Dr Siti Mariah said because the infection had moved into the community, Covid-19 cases were being detected in schools.

Recently, almost 80 schools were closed throughout Selangor after some teachers and students were infected with the virus. 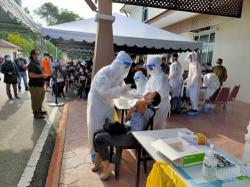