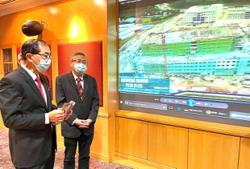 PUTRAJAYA: The construction of the Universiti Tunku Abdul Rahman (UTAR) Hospital in Perak will ensure better training for healthcare students, and Deputy Education Minister Datuk Dr Mah Hang Soon has urged all groups to set aside their differences and donate to the cause.

Mah, who is also MCA's UTAR fundraising committee chairman, has estimated that RM330mil will be required to build the hospital in Kampar, Perak.

"I urge all groups to set aside our political and cultural differences. Together, let's ensure that this hospital can be constructed soon for the benefit of everyone," he told a press conference at the Education Ministry on Monday (April 26).

Mah said that since UTAR launched its Faculty of Medicine and Health Sciences in 2009, it had produced 620 medical professionals.

"All graduates enrolled in UTAR's medical sciences programmes have since been recruited into government hospitals, thereby adding new impetus to our nation's public healthcare system," he added.

Mah said the proposed UTAR Hospital would act as a research and training centre for undergraduates.

"This hospital will be research-based, which will improve medical education in this country," he added.

Mah said MCA would raise funds for the hospital through the sale of "Golden Brick" coupons, charity sales and a charity fund, depending upon the Covid-19 infection rate.

He added that MCA state liaison committees, divisions and branches across the country would be mobilised to organise fundraising campaigns for the hospital.

He also urged corporations and businesses to make generous donations in the form of funds or essential items such as hospital beds and ambulances, among others.

"In return, the corporate donor may have wards or operating theatres named after them," he added.

Mah said members of the public may donate to the construction via online transfers or cheques banked into the UTAR Education Foundation's Public Bank account (31-7111-5615).

For a tax exemption receipt to be issued, donors need to email their particulars and a copy of the transfer slip to lsjen@utar.edu.my.

The first phase of the hospital will have 250 beds for western medicine, and a traditional Chinese medicine and ayurvedic medicine building with 100 beds. It is expected to be completed in August or September.

The second phase, with 250 beds, will house western medicine facilities and is expected to be completed in the middle of next year.

Located within UTAR's Kampar campus, the hospital is set to be a not-for-profit institution.

It is expected to be fully operational next year, in conjunction with UTAR's 20th anniversary.