KUCHING: Sarawak reported 429 new Covid-19 cases on Wednesday (April 21), dropping below the 500 mark for the first time in seven days.

In a statement, the state disaster management committee said Meradong district recorded the highest number with 82 new cases, including 65 from the new Sungai Lemayong cluster.

Of the new cases, the committee said only 64 showed symptoms of Covid-19 during screening.

It said 276 of the cases were close contacts of Covid-19 patients and 96 detected through screening of active clusters, while two were imported cases involving individuals returning from other states in Malaysia.

The committee also said there were four new fatalities, taking the death toll to 145.

All four deaths were men aged from 61 to 82 years and all had comorbidities.

Another 414 patients have been discharged from treatment, bringing the total number of recoveries in the state to 19,641 to date.

There are currently 5,706 active cases, including 11 in intensive care.

Meanwhile, the committee said the enhanced movement control order at the Sri Aman prison and staff quarters was lifted on Wednesday (April 21) as a second round of screening detected no new cases.

It said the enhanced MCO at Kampung Menuang Baru in Limbang would be lifted on Thursday (April 22) for a similar reason.

"There is also no evidence that the infection is still spreading in both locations," it said. 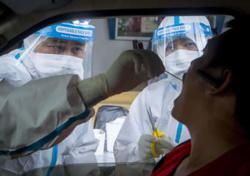