MELAKA: A vocational college at Alor Gajah was ordered closed until May 4 after 37 of its students tested positive for Covid-19.

"The first infection stemmed from a student who returned to KVDSMZ's hostel after visiting a Covid-19 red zone on April 16.

"Following the emergence of the first case, health authorities carried out swab tests on 196 teachers and students, and 37 were found positive, thus warranting the temporary closure," he said on Wednesday (April 21).

Rahmad said tests are being continued on another 430 close contacts of these 37 individuals as soon as possible.

He said sanitation work had been also performed with the assistance from the Melaka Fire and Rescue Department, and the situation is being constantly monitored.

Rahmad added that several students have been also placed under quarantine following the spike of cases since April 16. 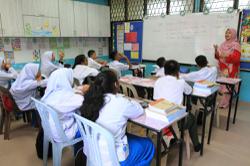 Sai Wan’s passing a great loss to journalism, says King
Mosques in Perlis to continue reciting qunut nazilah for Palestinians
Woman's body found in garbage trap of KL river
Johor cops arrest 20 over viral rioting incident in Batu Pahat
Don't leave aside those with HIV during pandemic, govt urged
Dr Wee remembers veteran journalist Wong Sai Wan as a mentor to many journalists
Pasir Gudang MP calls for another round of bank moratorium to help groups hit by MCO 3.0
Curfew in eastern Sabah waters extended to May 30
Covid-19: Over 200 ordered to return after attempting to cross district borders on first day of Raya
Covid-19: 18 fined for SOP violations in Penang