GEORGE TOWN: An oil tanker laden with cooking oil hit a railing at the Juru toll plaza, spilling 20,000 litres of oil on the highway.

Penang Fire and Rescue Department fire operations and safety officer Nafis Ariff Abdullah said the tanker was heading north when it hit the side rail at the toll plaza at noon on Tuesday (April 20).

He said the Fire Services team and the PLUS Response Squad rushed to the scene and managed to plug the leak in the tanker and clean up the spilled oil.

"The driver of the tanker, who was slightly injured, was taken to the hospital by ambulance," he said. 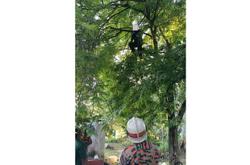 INTERACTIVE: Teachers a class above in difficult times
Keep masking up, Malaysia
Registration for second round of AZ jabs to start soon
Experts: Fear leads to overcrowding at PPV centres
Muhyiddin: UN must act now
Youths to be included in shaping govt policies
OIC to be asked to help protect Palestinians
The terrific art of terrarium
All Islamic nations should support the Palestinian cause, says Abdul Hadi
Covid-19: Four in JB compounded RM5,000 each for not observing SOP