By IMRAN HILMY and VENESA DEVI

Busier than ever: Lines of cars at the Covid-19 Assessment Centre at the Pasir Gudang indoor stadium.

ALOR SETAR: The source of Covid-19 infections at Maktab Mahmud in Baling is being investigated by the Kedah government.

He said the state Health Department had isolated the school and conducted swab tests on close contacts.

“A total of 80 students, 23 teachers and two hostel wardens had been identified as close contacts to the students, ” he said after a breaking fast event on Saturday.

On whether the school would be closed, Dr Mohd Hayati said it would depend on the state Education Department, which would review the situation.

In JOHOR BARU, the public was seen making a beeline to the Covid-19 Assessment Centre (CAC) in Pasir Gudang and Bukit Indah after cases were detected at several schools.

In a notice to parents, SJK(C) Pandan confirmed that one of its Year Three pupils had tested positive on Thursday.

“The school has informed the state health department and Pasir Gudang district education department. All students and teachers in the same class as the student have been told to take a Covid-19 test at Pasir Gudang and Bukit Indah CAC on Sunday, ” read the notice.

In a separate notice, SJK(C) Foon Yew 1 noted that one of its Year Three pupils had also tested positive for Covid-19.

“As 10 of our teachers are currently under quarantine, the school has received approval from the Johor Baru district education department to allow Year Three students to study from home for a week until April 24, ” read the notice posted on the school’s Facebook page.

Over in Selangor, SJK (C) Pin Hwa 1 in Shah Alam will be closed until April 22 after two more pupils tested positive for Covid-19.

The school’s natural disasters committee said tests would be carried out by the district health office today and tomorrow.

“The Shah Alam Fire and Rescue Department sanitised the school on April 17 and periodic sanitisation will be done by the school’s staff, ” it said in a notice to parents dated April 18.

The notice also said that the two pupils were in Year Three and Year Six, and did not have siblings in the same school.

However, the school advised anyone who shared the same transport or attended the same tuition centre to self-quarantine.

To date, pupils and teachers from 14 classes in the school had been placed under quarantine after three teachers tested positive last week. 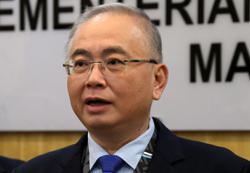