SEREMBAN: The National Security Council needs to review its decision to relax Covid-19 mitigation steps, such as allowing Ramadan bazaars to open, following a spike in cases and the emergence of other variants in Malaysia, says Khairy Jamaludin.

Khairy, who is Coordinating Minister for the National Covid-19 Immunisation Programme, said this was necessary as there was a real possibility of Malaysia being hit by a “fourth wave”.

“As someone responsible for the immunisation programme, I am concerned about the fourth wave and my greatest worry is the variants of the virus.

“Yesterday, the Health director-general announced that there are already 17 cases of the South African variant in Malaysia and we know this particular one is not only more transmissible but the vaccines are less effective against it, ” he said after visiting the Seremban City Council Hall Vaccine Dispensing Centre.Khairy, who is also Science, Technology and Innovation Minister, said if the people wished to see a decline in case numbers, they must continue adhering to SOP.

“Yesterday I sent a picture of a Ramadan bazaar in KL to the Prime Minister and what we saw is a matter of great concern.

“If we are hit again, the rate of transmission will go up and it will certainly be worse than the third wave, ” he said, adding that the authorities managed to bring down the number of cases last week, only to see it spike again.

Khairy said the people could not be faulted for wanting to go to Ramadan bazaars, but once they were there, it was almost impossible to enforce social distancing.

“So in this situation, its either you continue (allowing Ramadan bazaars to operate) or you don’t, ” he said.Health experts say real-time data and field observations are providing signals of an impending fourth wave, with people’s behaviour the main factor behind the rise in cases.

In Perak, the state government is already considering restricting Ramadan bazaars in the state if people refuse to follow SOPs.

“If the situation is beyond control, with more complaints, we will not hesitate to close the operations of such bazaars, ” she said after launching a community library at the Seri Kepayang flats here yesterday.

On whether parents should bring young children to the bazaars, Nolee Ashilin said it would be the best if they could avoid it.

“We must all be very careful, as the cases are increasing. We do not want to see Ramadan bazaar clusters, ” she added.

Health director-general Tan Sri Dr Noor Hisham Abdullah shared a forecast on Twitter showing how the Covid-19 infectivity rate could be reduced from an R nought of 1.2 to 0.8 if people complied with SOPs, a rate which would reduce daily cases to below 1,000 by end of May.

However, the same forecast showed non-compliance would result in over 2,000 cases per day by mid-May.

Separately, Khairy said children living in other states will be allowed to return to their hometowns to take their aged or sick parents for Covid-19 vaccination.

He said they would only have to show proof of their parents’ appointments to get the clearance to travel interstate. 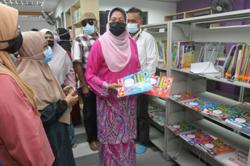