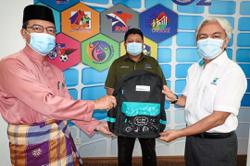 KOTA KINABALU: Some 3,750 primary students from 132 schools in Sabah, and 200 from 17 schools in Labuan, have benefited from Yayasan Petronas’ Back To School (BTS) 2021 programme this year.

The programme, under which recipients get new sets of school supplies and personal hygiene kits, kicked off last month.

The last leg of the programme was at Nabawan district on Friday (April 16) where 120 pupils, including those from Sabah’s most remote primary schools, received the supplies.

Deputy Minister in the Prime Minister's Department (Economy) Datuk Arthur Joseph Kurup was present to hand over the items to school representatives at the Nabawan district education office, accompanied by Sabah and Labuan Petronas head of operations Jasper Diego.

Arthur, who is Pensiangan MP, said Yayasan Petronas' contribution would go a long way towards helping the underprivileged families of schoolgoing children there.

More than 21,000 underprivileged primary students across the country have received the supplies under BTS 2021.