PETALING JAYA: Any discussion made outside Muafakat Nasional - a political pact between Umno and PAS - is not considered to be within the agreement of the two parties, says Datuk Seri Dr Ahmad Zahid Hamidi.

“Any discussion outside of Muafakat will only be known by those involved in it, ” he said to Mingguan Malaysia.

Recently, PAS president Datuk Seri Abdul Hadi Awang said that his party has put seat allocation discussions with Umno on hold, though it is still having negotiations with Bersatu.

“There are now PAS leaders who are carrying out the task (seat allocation talks) with Bersatu.

“With Umno, there used to be a committee formed but Umno itself made changes mid-negotiations. As Umno has issues currently, we will talk to Bersatu first, ” he said.

Meanwhile, Ahmad Zahid, who is also the Bagan MP, also reiterated his party’s stance that they are open to partner with anyone in order to form the government after GE15.

He added that this was to ensure political stability and economic development of the country.

“The people want a new mandate to be given to the party that would be able to form a stable government.

“Umno and Barisan Nasional are ready to work together with any political party after the general election. At that time, the formation of the government will not be disputed because that would be post-GE.

“What is important is that Umno must be dominant again, along with its allies in Barisan, ” he said. 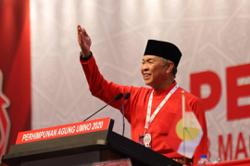