PETALING JAYA: From contributions dating way back to the British colonial era, the Sikh community have played an important role in the development of the country and they are a crucial aspect of Malaysia's racially diverse setting, says Perak Ruler Sultan Nazrin Muizzuddin Shah.

Sultan Nazrin said the Sikh community had always stood out and made their presence known despite making up only 2.5% of the population.

"These five characteristics - adaptability; patriotism; commitment to education; hard work and thriftiness; and respect for tradition - have together empowered the Sikhs to conquer the highest heights in modern Malaysia.

"From the modest beginnings of their forebears in the security forces of the nascent British colony, they have become highly-valued citizens of Malaysia, a numerically small but vitally important component of our rich multicultural society," he said.

Sultan Nazrin was speaking during the book launch of "Sikhs in Malaysia: A Comprehensive History" by Dr Ranjit Singh Malhi on Saturday (April 10) morning.

Noting that the first Perak Armed Police was set up in 1874, Sultan Nazrin said it was the reputation for courage, loyalty and discipline that ensured safety in tin mining areas and coastal settlements filled with highway bandits.

"The Sikh's prowess in the security forces became so well established that, as the book informs us, even non-Sikh Indians were reportedly encouraged to don a turban in order to qualify!

"When the first colony-wide regiment was established in 1896, Sikhs made up over 80% of it."

At present, Sultan Nazrin said Perak hosts the largest Sikh community in the country outside of Kuala Lumpur, adding that it was the qualities of dedication, discipline and sense of duty that have propelled the Sikh community across the board.

He also said the Sikhs can be found at the top of their game in all professions, such as lawyers, judges, accountants and distinguished academics.

"They equally excel in business and industry, as well as in the fields of sports, culture and the arts," he added.

Sultan Nazrin, who cited various prominent Sikh figures in Singapore and Malaysia, said among the "main ingredients" to the success of the community was adaptability.

"Despite the very different climate, culture and customs, these early Sikhs were able to integrate comfortably with the existing local community and take full advantage of the opportunities available in this new environment.

Sultan Nazrin said the next ingredient is patriotism, where there were many prominent Sikhs serving in the armed forces.

The third "ingredient" said Sultan Nazrin, was the emphasis on education, as he pointed out the Sikh community's willingness to invest in their children have contributed to the nation's human capital.

Sultan Nazrin said Ranjit's book has helped in highlighting contributions by the Sikh community while providing fascinating and illuminating details of various aspects of the community's history.

"I highly recommend you to delve into this most readable book, which I believe is destined to become a classic in this field," he said. 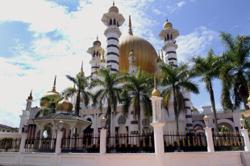