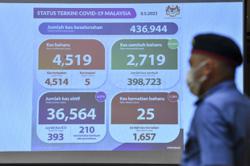 “The increased cases in Sarawak is due to a rise in the number of clusters, including those in longhouses.

“The factors that contribute to the increase in cases are social and mass gatherings such as funerals, weddings and others, ” he said in a statement yesterday.

The country recorded seven new clusters of which four were linked to the workplace while the remaining three were from the community.

The Sungai Gemuan cluster, he said, was a community cluster found in Maradong.

“The index case in this cluster tested positive for the virus on March 28 after a symptomatic individual screening.

“This cluster involves a community in Sungai Gemuan, Meradong, ” he said, adding that 260 individuals had been tested, of which 39 were positive for the virus.

In the Disso community cluster detected in Saratok, Sarawak, Dr Noor Hisham said the index case tested positive for the virus on March 31 after a symptomatic individual screening.

To date, he said 208 individuals in this cluster had been screened, of which 24 tested positive.

Of the 1,854 new cases, Dr Noor Hisham said 1,834 cases were locally transmitted while 20 were imported.

The total active cases in the country stands at 14,805 cases.

Currently, 169 patients are in intensive care, with 79 requiring ventilator support.

Five deaths were also recorded, bringing the death toll to 1,313. 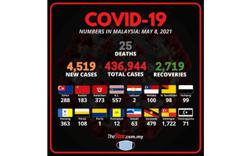 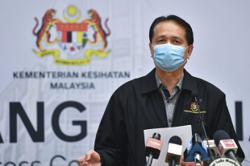