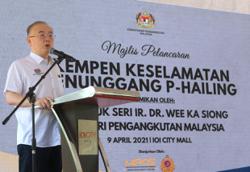 PUTRAJAYA: A surge in the number of p-hailing riders to around 100,000 has prompted the authorities to come up with a campaign to educate this group on road safety.

The campaign, said Transport Minister Datuk Seri Dr Wee Ka Siong, is important as the number of those involved in providing such services continue to grow.

He said p-hailing was a new service that saw a surge in demand since the movement control order was introduced to deal with the Covid-19 pandemic.

“With the growing number of p-hailing riders, it is important to create awareness to ensure their safety as well as that of other road users, ” he said.

Dr Wee pointed out that of the 7,525 road accidents recorded during the nine months of the MCO last year, 2,576 deaths involved motorcyclists.

“Part of the statistics also involved p-hailing riders, ” he said during the launch of a p-hailing road safety campaign yesterday.

He said the campaign was a proactive move by the government to educate p-hailing riders on the importance of road safety.

The campaign, he said, would go on for six months until September.

Among the programmes lined up are road shows, pop-up messages on road safety, briefings and training on safe riding.

“The ministry is also planning to give safety reminders to all motorcyclists when they stop at traffic lights that are equipped with CCTVs, ” said Dr Wee.

At another event later, he said the age limit of tour buses has been extended to 15 years.

He said the decision to extend the statutory life of tour buses was arrived at following consultation with the Land Public Transport Agency, with the aim of providing relief for operators during this difficult period.

With this, buses that are 12 years old can see three more years added to their lifespan, provided they can pass Puspakom inspections.

“This will hopefully assist industry players as well as benefit the people, ” he said.