KLANG: Acting on information provided by their Saudi counterparts, Malaysian police seized a drug stash worth a whopping RM221mil.

The Captagon drug is commonly linked to terrorists in the Middle East.

Millions of these pills were found hidden in boxes of aluminium door springs inside a container at Port Klang.

The drugs were intended to be delivered to another country following a pit-stop here.

Intelligence gathered beforehand with the General Directorate of Narcotics Control of Saudi Arabia helped identify the vessel and container when it docked at Westport on Sunday.

It is known that the container with the drugs was supposed to be transferred to another vessel before being shipped to Singapore and beyond.

While no arrests were made in the raid, police discovered more than three million pills hidden inside the springs.

Around 889 boxes were seized, with 875 boxes full of the springs hiding the pills.

A thousand pills on average were stuffed inside the springs, investigators found. 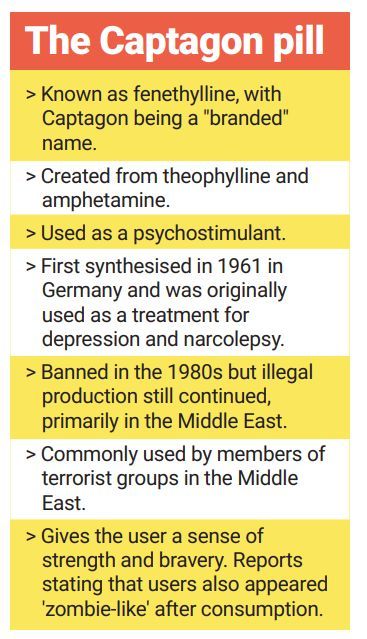 It is believed that the drugs originated from the Middle East.

Comm Razarudin said the drug was commonly used by terrorists fighting in the Middle East, but has now found a use as a recreational or party drug.

“Besides its hallucinogenic properties, it also gives the user a sense of strength. Our investigations showed that the pill contains amphetamine as well.

“So far, these pills have not been marketed in Malaysia. We also don’t want them here and it’s best if it stays that way, ” he said at the Port Klang police station.

“The police will continue forming international partnerships to disrupt and stop drugs entering this country, and to ensure Malaysia is not used as a transit spot for these illicit goods, ” he said.

On March 15, the Customs Department scored a huge success when its officers seized 16 tonnes of Captagon pills worth a staggering RM5.2bil.

The drugs were found in three 40-foot containers and hidden inside trolley wheels at Port Klang.

The transshipment was destined for a third country in the Far East but a tip-off from Saudi authorities put paid to the smuggling attempt by an international drug cartel.

Johor police chief Comm Datuk Ayob Khan Mydin Pitchay, who used to helm the Bukit Aman counter-terrorism division (E8), was quoted as saying that terrorist groups such as the Islamic State have been known to encourage their members to use such drugs when fighting.

These groups, he said, would usually use Malaysia as a transit point to move the drugs to other parts of the world.

Captagon has become the most popular recreational drug in certain parts of the Middle East in recent years.

It is a brand name for the amphetamine drug fenethylline hydrochloride and had originally been marketed for the treatment of conditions like narcolepsy, depression and hyperactivity.