PUTRAJAYA: The findings of the 2018 Auditor-General’s report has led authorities to a damning discovery.

It was found that a syndicate has been hacking into the Immigration Department’s system to sell temporary employment visit passes (PLKS) to thousands of foreign workers, causing massive losses of revenue to the government.

The syndicate, believed to have been operating since 2017, was said to have installed transmitters in the computer system room with the help of “insiders”.

The hidden devices allowed racketeers to not only hack the system but to make changes and use passwords belonging to senior officers.

Sources with knowledge of the case said when the syndicate members were able to gain access to the system, they would key in names and details of foreign workers to make it look as though they had obtained the PLKS via the official channel.

“Investigations showed the syndicate had hacked into the system and sold passes to foreign workers for between RM6,000 and RM8,000 per pass.

“It is estimated that the syndicate had sold hundreds of thousands of PLKS stickers illegally to foreign workers over the years and have been raking in millions of ringgit from the illegal activities, ” said a source.

According to the report released in July 2019, there were fraudulent approvals for foreign workers under the Malaysia Immigration System or myIMMs.

In the federal ministries/department section, the report stated that some 32,424 foreign workers were created and approved to 123 employers, as well as first-time levy payments amounting to RM40.79mil were made in an unorganised and dubious manner.

Of the 32,424 foreign workers, 21,378 of them had obtained temporary PLKS and the estimated first-time levy payments to be collected amounted to RM24.55mil, said the report.

Sources said the main concern was that the syndicate could access the Immigration system, allowing them to “open” black list and red alert status.

“This would allow those in the lists to enter the country without getting flagged.

“To avoid detection, the syndicate moved its ‘operation centre’ from one luxury hotel to another, ” the source added.

The ruse was put to an abrupt end in a special joint operation between the Malaysian Anti-Corruption Commission and the Immigration on Monday night.

Five suspects, aged between 33 and 43, including the syndicate leader – who is a Datuk – were arrested at a hotel in the sting operation.

MACC chief commissioner Datuk Seri Azam Baki said the focus of their investigation would be to look into the role of each and every syndicate member including “insiders”, adding that those involved would be dealt with according to the law.“

I would like to commend Immigration director-general (Datuk Khairul Dzaimee Daud) for his willingness to cooperate with us to uncover the case, ” he said.

Last year, the department also extended its help to the MACC in smashing a syndicate - whose members also include Immigration officers – for providing “Immigration services” to foreign workers and illegal immigrants. 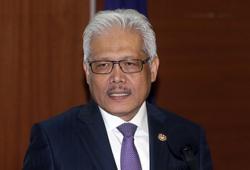