KUALA LUMPUR: The Court of Appeal is scheduled to hear Datuk Seri Najib Razak’s appeal today against his conviction and jail sentence for misappropriation of RM42mil from SRC International Sdn Bhd funds.

It is Najib’s first appeal after the Kuala Lumpur High Court, on July 28, last year, sentenced the former prime minister to 12 years in prison and fined him RM210mil after finding him guilty of seven charges of criminal breach of trust (CBT), money laundering and abuse of position, involving the RM42mil.

Najib has submitted 307 grounds in his petition of appeal on why he should be cleared of the charges.

Najib was also sentenced to 12 years’ prison and handed a RM210mil fine, in default five years’ jail, in the case of abuse of position.

However, he will only serve 12 years in jail as the judge ordered all the jail sentences to run concurrently.

Najib, 67, is currently out on bail of RM2mil in two sureties pending appeal.

A total of 21 reporters from local and international media will be given passes to follow the proceedings via a video link in a room. — Bernama 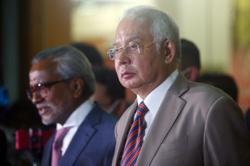