Muhyiddin finally gets a taste of Haji Salleh’s mi kolok

VIP customers: Muhyiddin and his wife Noorainee taking a look at how mi kolok is prepared at Restoran Sepinang Sari in Jalan Satok, Kuching. — Bernama

KUCHING: A year after Tan Sri Muhyiddin Yassin brought Haji Salleh’s mi kolok to national attention, the Prime Minister came to taste the noodles for himself.

Salleh Reduan, the proprietor of Sepinang Sari Cafe in Satok here, beamed with pride when Muhyiddin and his wife Puan Sri Noorainee Abdul Rahman arrived at 7.30am yesterday for breakfast.

“Syukur alhamdulillah, although I did not receive any material benefits from meeting the Prime Minister and Chief Minister, I feel grateful because they recognise my efforts in running this business, ” he said.

His mi kolok became famous when Muhyiddin cited it as an example when announcing additional initiatives for small and medium enterprises under the Prihatin economic stimulus package on April 6 last year.

Salleh, 73, said it came as a surprise to hear his name mentioned by the Prime Minister.

“I did not expect it at all. I even wondered whether I had heard wrongly.

“But our sales increased the following day. Friends and customers said they wanted to come and eat my mi kolok after hearing the Prime Minister’s announcement, ” he said.

Salleh, who sold the noodles for over 40 years, has now retired due to health issues and handed the business to his children.

His daughter Freda said she felt proud to be able to show Muhyiddin how to prepare a bowl of mi kolok during his breakfast visit.

“I never dreamt I would have the opportunity to serve the leader of our country, ” she said, adding that she prepared a special “mi kolok Muhyiddin Yassin” with slices of beef tendon for the Prime Minister. 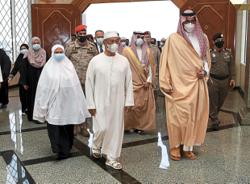