KUALA LUMPUR: Private vehicle owners whose driving licence or road tax payments expire in February and March have until May 31 to renew them, says Dr Wee Ka Siong.

The Transport Minister said this is the second extension given, provided that the vehicle's insurance is still valid.

This follows an announcement on Jan 29 where Dr Wee said that exemptions were granted to all private vehicle owners who need to renew their driver's license and road tax from Feb 1 to March 31 due to the second movement control order.

They were given 30 days after the exemption period, which is until April 30.

Dr Wee also said that people with Motor Vehicle Licences (LKM) and Competent Driving Licences (CDL) that are expiring in April and May can still renew them on June 1 onwards until July 31.

Road Transport Department (JPJ) offices throughout the MCO period, '' he said after launching the MyRail5 special travel pass for students and the disabled at KL Sentral here Friday (Mar 26).

''Vehicle owners can still drive their vehicle provided that the vehicle’s insurance is still valid. They will be given time like before to do their renewals, '' he said.

''I have met with the CAAM, and the Ministry treats this issue with utmost importance. It is important to remind all training schools and stakeholders to adhere to flying protocols, '' he said.

On the crash of a Airbus H125 helicopter at the Sultan Abdul Aziz Shah Airport in Subang on Wednesday (March 24) that injured two of the five people on board, Dr Wee said the investigation will follow the usual standard operating procedure.

''An independent investigation team will probe and present their findings in a report in 30 days before it is submitted to the Ministry. We do not want to speculate on the cause of the incident, '' he added. 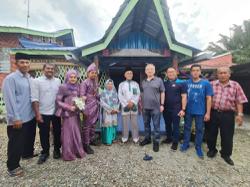