The former premier claimed that Muhyiddin had a hand in not allowing political parties to be registered.

"Muhyiddin believes that Perikatan Nasional will win the next election because it has made preparations.

"Flags and banners have been booked and the distribution of areas between Bersatu, PAS and Umno has been negotiated," he said.

Dr Mahathir claimed for Muhyiddin, there was only one problem that has not been resolved, and he (Muhyiddin) hoped that no opposition party would contest.

He said with this, Perikatan Nasional would win without contesting.

"Muhyiddin can determine that the enemy party will not be registered. It starts with Pejuang.

"If Pejuang is not registered then this party will not be able to contest as Pejuang party. Perhaps the Pejuang candidate has to contest as an independent candidate," he said in his blog Chedet on Thursday (March 25).

He added that if this was done, then these independent candidates would not be able to use the Pejuang symbol and flags, thus confusing voters.

He said maybe Pejuang would have to contest the next general election under the banner of another party, like Bersatu did in 2014 under the PKR symbol.

"If tried, PKR may not agree to give many areas to Pejuang. Support may also not be provided. Then Pejuang will lose.

"During GE14, then prime minister Datuk Seri Najib Razak cancelled the registration of Bersatu and did not register Pakatan Harapan.

"So the opposition parties had to contest in the name of PKR, using PKR symbols and flags. Najib's attempt can be handled by the opposing parties by contesting as a PKR party," he said, adding that the opposition party still had enough support to defeat Barisan Nasional.

He said Muhyiddin may try to hold an early general election while Pejuang and Muda are not registered. 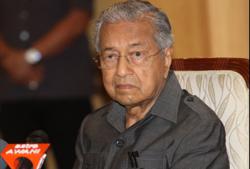