Umno secretary-general Datuk Seri Ahmad Maslan said the invites to the two leaders were sent through a letter dated March 3.

Ahmad Maslan was responding to a report quoting PAS vice-president Datuk Mohd Amar Nik Abdullah saying that the Islamist party has yet to receive an invitation to attend the Umno general assembly, which will be held at Putra World Trade Centre (PWTC) in Kuala Lumpur.

On Tuesday (March 23) The Federal Territories National Security Council gave its approval for the 2020 Umno General Assembly to be held on March 27 and 28.

The general assembly was initially scheduled for Dec 6 and 7 but postponed because of Covid-19 restrictions.

The general assembly will be conducted in a hybrid manner combining physical and virtual gatherings among delegates from 190 divisions nationwide.

Umno vice-president Datuk Seri Ismail Sabri Yaakob had stated earlier that each division could send only six representatives to the assembly and they must apply for police permission to travel interstate.

The assembly would also propose that the 15th General Election be held before the end of the first quarter of this year. 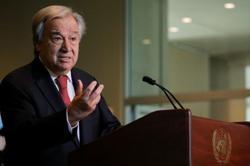