PETALING JAYA: Parti Pejuang Tanah Air has hit out at a PKR lawmaker who accused Tun Dr Mahathir Mohamad of encouraging party-hopping lawmakers from Umno and causing the downfall of the Pakatan Harapan government.

Its protem president Datuk Seri Mukhriz Mahathir (pic) said the former premier's political struggle was only to contribute to the development of the country and fight against injustice. 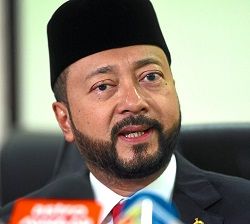 "As the former chairman of the Parti Pribumi Bersatu Malaysia membership committee, I had protested against accepting some of the Umno MPs.

"But the Bersatu president (Tan Sri Muhyiddin Yassin) had used his power to reject my recommendations in the party's presidential council," Mukhriz, Bersatu's former deputy president, said in a statement on Wednesday (March 24).

Mukhriz was responding to Setiawangsa MP Nik Nazmi Nik Ahmad's statement that the previous power transition plan agreed upon by Dr Mahathir and PKR president Datuk Seri Anwar Ibrahim under Pakatan Harapan's tenure was defective, as Dr Mahathir had taken steps to consolidate his own power.

Nik Nazmi claimed the agreement on Anwar becoming prime minister after two years was a big eyewash because Dr Mahathir pulled in Umno MPs to secure his position, even when Pakatan had enough numbers to form the government.

''There was no need (to get MPs to switch) at that time because we won and had the majority in Parliament.

''People started whispering when Umno MPs jumped, asking if Dr Mahathir was reneging on the deal with Anwar. Obviously, in hindsight, he was, '' said Nik Nazmi.

In response, Mukhriz said that in PKR's excitement to make Anwar prime minister, Nik Nazmi had put the blame for its own failure on Dr Mahathir.

"Until today, Dr Mahathir continues to fight corruption and clearly, he has not benefitted in any way from the 'Sheraton Move'.

"If there are elements of graft that are against the law or ethics, it is better to expose those who are enjoying it now after betraying the mandate of the rakyat.

"Clearly, it is not Dr Mahathir," said Mukhriz.