A TOTAL of 98.29% of all Chinese vernacular schools in the peninsula are against the implementation of Jawi calligraphy in the Year Four Bahasa Melayu textbook, according to a survey conducted by educationist group Dong Zong.

Sin Chew Daily reported that only 17 of the schools surveyed, representing 1.71% of the population, agreed to it.

“Nearly all of the big schools are against it. Those who agree to it are schools with nearly 100% non-Chinese pupils. This is something we can understand, ” Dong Zong president Tan Tai Kim said.

He pointed out that the survey showed that seven schools in Perak had agreed to it, making it the highest among other states.

Johor had four, Kedah and Selangor each had two, and Perak and Negri Sembilan each had one, he said.

Tan added that the survey in Sabah and Sarawak was still being conducted and that they would announce their findings soon.

He urged the government to reconsider its implementation and instead focus on strengthening pupils’ mastery of Bahasa Melayu.

“To help our pupils master Bahasa Melayu is crucial. This is something we welcome and support, ” he said.

It was earlier reported that six pages of Jawi calligraphy were initially planned to be introduced in Year Four Bahasa Melayu textbooks beginning 2020 but had met with stern opposition from educationist groups such as Dong Zong and Jiao Zong.

> Controversial Malaysian rapper and film director Namewee has finally returned to Malaysia after spending eight months in Taiwan and is ready to surrender himself to the police, China Press reported.

The 37-year-old from Muar wrote on Facebook that he landed at the Kuala Lumpur International Airport on Sunday and will be spending the next few days in quarantine.

Just two days before, he announced that he would be “returning to Malaysia and surrendering himself” to the police.

He was reportedly sought by the police after Seniman made a police report in December 2020 against his film titled Babi.

It was alleged that the film, which was not screened in Malaysia, contained elements of racism. 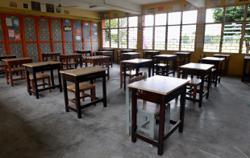