Covid-19: Recoveries continue to outpace infections as over 300,000 have recovered since pandemic began, says Health DG 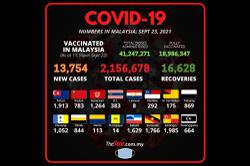 PUTRAJAYA: More than 300,000 people in Malaysia have recovered from Covid-19 since the pandemic began last year.

The number of recoveries continued to outpace infections on Thursday,

as 1,647 new cases were registered in the same period.

Five of the new cases are imported infections, while the rest are local transmissions.

Dr Noor Hisham said Selangor reported the highest number of new cases with 712 infections, which is 43.23% of the country’s total.

“Of Selangor’s total, 619 cases were uncovered from infection clusters as well as contact tracing activities, ” he said.

Dr Noor Hisham also said there were nine new Covid-19 deaths, which all involved Malaysian citizens aged between 48 and 78.

“Four of the death cases were in Selangor, two in Johor and the rest were in Perak, Kelantan and Kuala Lumpur, ” he said.

One case in Hospital Sultanah Nora Ismail in Batu Pahat, Johor - involving a 58-year-old woman - was declared as "dead on arrival".

The woman had diabetes. 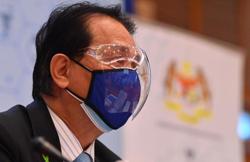