GEORGE TOWN: Distraught parents Zaidi Mohd Din and Fazilah Othman have had only one thing on their mind these past two years: finding out how and why their 29-year-old son died in police custody.

They hoped that an inquest, which was to begin on Tuesday (March 9) after Covid-19-related delays, would shed light on Mohd Fadzrin Zaidi's reported death by hanging at North Seberang Prai district police headquarters on Nov 22,2019.

However, the inquest hit a snag when, according to the couple's lawyer M. Visvanathan, the Coroner's Court decided it was not necessary to hand over certain documentation pertaining to the case.

"Without these documents, it is going to be difficult to follow through with the proceedings," Visvanathan said, adding that Coroner Norsalha Hamzah said there was no necessity to hand over the documents.

"She cited that Section 51(A) of the Criminal Procedure Code, where the prosecution is required to supply documents pertaining to a case to the defence team before the hearing commences is not applicable in an inquest.

"This matter will be referred to the High Court for revision... (because) if we are not presented with the documents we cannot proceed with this inquest," he said.

Visvanathan said it was not normal to be denied such documents.

"We will be filing a review of the Coroner's decision at the High Court," he said at a press conference called by NGO Edict Malaysia at the Traffic Court here on Tuesday.

Sharing the couple's anguish over Mohd Fadzrin's death, Zaidi told the same press conference his son was arrested for drug possession and remanded for five days on Nov 21,2019.

Zaidi, 57, said his son spent the day with his fiancee before being arrested.

"My son was to be wed and was of sound mind.

"All I want to know is what caused his death and, if he hanged himself, why he did it," said Zaidi, a fisherman.

"When we met him on Nov 21 when he was remanded, he seemed fine and asked us to come to get him the following Wednesday, when the remand was to end.

"On Nov 22, my eldest son called me to say the police had contacted him and said Mohd Fadzrin had hanged himself.

"We were in shock as he was fine and not someone who would take his life. He did not have a drug problem," Zaidi said of his son, who worked as a gravedigger.

Fazilah, 53, said Mohd Fadzrin, the second of her eight children, was close to her and would always rush to help her even when he was ill.

"I just want to know what caused his death. All we have is his death certificate and we were told that there was no foul play.

"They scheduled an inquest but now there are issues.

"We just want to know what happened so we can move forward.

"What did he use to hang himself if he did take his life?" she asked. 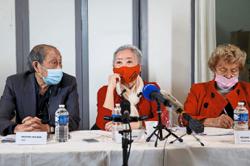