KOTA KINABALU: Veteran politician Tan Sri Abdul Ghani Gilong (pic), who was among state leaders who oversaw Sabah becoming part of the Federation of Malaysia, has died of Covid-19. He was 88.

His son Mohd Anuar said Abdul Ghani, who had other medical conditions, breathed his last yesterday and was buried at the family burial ground in Kampung Silou, Ranau.

He was admitted to the Queen Elizabeth Hospital here a week ago.

Abdul Ghani was part of the Sabah team, led by Tun Mohd Fuad Stephens, that saw the formation of Malaysia on Sept 16,1963.

Starting his political career with Mohd Fuad’s Upko party, he went on to join Usno under Tun Mustapha Harun in the late 1960s.

He held several federal ministerial posts including the Transport and Works portfolio between 1967 and 1978.

“I will always remember my father as a man who was fully committed towards wanting good roads and being an agriculturist at heart, ” Mohd Anuar said.

He credited his father as the person behind major road projects including the Kota Kinabalu-Ranau highway.

“His close relations with the then Prime Minister Tun Abdul Razak was helpful in his bid to bring about road development in Sabah and other parts of the country, ” Anuar said.

Anuar also said that his father was credited with introducing cabbage cultivation in the Ranau-Kundasang area that eventually saw many other highland vegetables being grown in Kundasang.

“He was always passionate about agriculture, ” he said, adding that his father had also helped introduce durian plantations to the Ranau district.

During the Malaysia Day celebrations 2010, he was named Tokoh Malaysia.

Universiti Malaysia Sabah vice chancellor Prof Datuk Dr Taufiq Yap Yun Hin in a Facebook post said the university awarded an honorary doctorate to him in 2017 as recognition for his contributions to the formation of Malaysia. 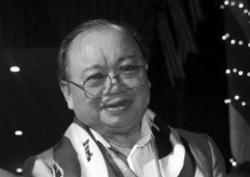