The Inspector-General of Police said while no reports of such offences had been lodged, the police would take stern action on those

who spread fake news about vaccines in an attempt to deter people from getting a jab.

“We have not received any report on the matter yet.

“Those who previously gave negative comments on the vaccine and influencing people not to take it should think twice.

“If there is any report, we will take action under the Sedition Act,” he told reporters after receiving his Covid-19 vaccine jab at Kuala Lumpur Health Clinic yesterday.

The Sedition Act applies to any person who does or attempts to, or makes any preparation to do, conspires with any person to undertake seditious action.

Meanwhile, those without lawful excuse but found in his possession any seditious publication is liable for a first offence to a fine not exceeding RM2,000 or imprisonment of not more than 18 months or both; while for subsequent offence, the individual can be jailed not more than three years and the publication shall be forfeited or destroyed.

The IGP hoped that half of police personnel and officers would be given the Covid-19 vaccine during the first phase.

“A total of 27,000 officers and personnel from five states have been listed for the vaccine jab during the first phase and we are still waiting for the list from nine other states,” he said. 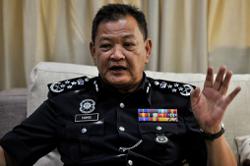