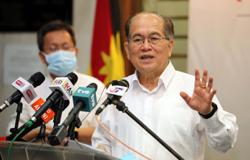 KUCHING: Sarawak has banned the importation of pigs, pork and pork products from Sabah with immediate effect following news that eight out of 13 pigs sampled from Pitas, Sabah, tested positive for African Swine Fever (ASF).

“The public is advised not to buy or bring in any pork and pork products from Sabah or any other neighbouring countries.

“Anyone who contravenes this Import Ban Order or imports any animal or animal product without permit is commiting an offence and can be fined up to RM50,000 and/or jailed for two years, ” he said in a statement.

“DVSS will also step up its awareness campaign and regulatory measures to ensure that the virus does not enter the state.

“Sarawak is still free from African Swine Fever, ” he said.

Uggah said DVSS had conducted several engagement and awareness sessions with the relevant stakeholders, including farmers, importers, Malaysia Airport Holdings Bhd and other government agencies in Sarawak, on the ban.

“DVSS will continue to enforce the Veterinary Public Health Ordinance 1999 to ensure pork and pork products imported are from ASF-free countries, ” he added.