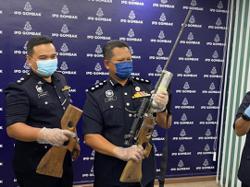 ISKANDAR PUTERI: A 63-year-old man was arrested after the police found two homemade air rifles in his house here.

Iskandar Puteri OCPD Asst Comm Dzulkhairi Mukhtar said that the suspect was arrested at about 5.30pm on Tuesday (Feb 16), after the police received a complaint from a 21-year-old man whose car was "shot" at.

"The victim was driving around Taman Ulu Choh and was heading towards Jalan Senduduk when he felt a 'shot' at the back of his car, which had caused a dent on the vehicle.

"He suspected the 'shot' came from one of the houses in the area," he said in a statement here on Wednesday (Feb 17).

Following the complaint, the police raided the 63-year-old man's house, where they found two air rifles and three marbles.

"The man was believed to have made the imitation arms himself after learning about it from watching YouTube videos.

"The suspect was also believed to have 'shot' the victim's car, as the latter was said to have the habit of making loud noises with his car that caused disturbances to those living in the area," he said, adding that the suspect also has a criminal record.

He added that the case is being investigated under Section 36 of the Arms Act 1960 for possession of imitation arms, and that the suspect would be remanded for five days starting from Wednesday (Feb 17). 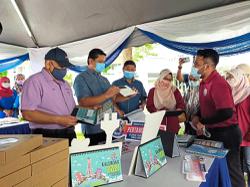