Ruckus at quarantine centre after two accused of stealing phones

SEPANG: A ruckus broke out at the Covid-19 treatment and quarantine centre at the Malaysian Agro Exposition Park Serdang after two men under quarantine there were accused of stealing several mobile phones.

"We received a report from a medical officer there that a ruckus had broken out involving patients.

"She then called police on duty to help handle the situation," he said when contacted on Thursday (Feb 11).

He said the medical officer said she had been told that two patients were detained for stealing four mobile phones belonging to other patients there.

"Our investigation revealed that she activated code orange, and police light strike force personnel were called in to calm the situation.

"She interviewed patients and found that several mobile phones had been stolen," he said, adding that several patients had detained the two men they believed were responsible.

He added that the suspects were then transferred to a different hall for their own safety and four mobile phones believed to be stolen were taken from them.

"One suspect, who is 24, is expected to be released from quarantine on Friday (Feb 12) while the other suspect, in his 40s, will be released today.

"We will arrest both suspects once they are released from quarantine," he said, adding that the case has been classified as theft. 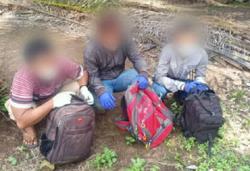