GEORGE TOWN: The 19-year-old college student who allegedly tossed her baby out of a 13th floor apartment unit in July has been released on bail.

M. Santhea, who was released on an RM90,000 bail with two surety, will report to Air Itam police station every Saturday and will not leave Penang.

She arrived at the courthouse here to be released at about 1.50pm and left in a car driven by a family member at about 2.07pm on Wednesday (Jan 27).

Santhea pleaded not guilty to killing her newborn daughter at the Sri Ivory Apartment in Bandar Baru, Ayer Itam at 8.25am on July 10 last year.

The offence under Section 302 of the Penal Code for murder carries the death penalty upon conviction.

She was represented by lawyer RSN Rayer.

Santhea was charged in a Magistrate’s Court here on July 16 last year under Section 302 of the Penal Code, which carries the death penalty upon conviction.

The alleged murder took place at 8.25am on July 10 at Sri Ivory Apartment in Bandar Baru, Ayer Itam.

Prior to that, the case caught the public’s eye following news reports that a baby was thrown out from a 13th floor apartment unit.

Although a murder charge under the Penal Code is a non-bailable offence, the former college student was granted a RM30,000 bail in September by the Court of Appeal.

Her counsel RSN Rayer had appealed on the grounds that the girl, who turned 18 in April last year, required medical attention after giving birth to the child unassisted at home.

However, Santhea’s bail was revoked by the Magistrate’s Court on Dec 17 last year after the case was transferred to the High Court.

Magistrate Jamaliah Abd Manap had then said the bail was automatically revoked once the case had been sent to the High Court. 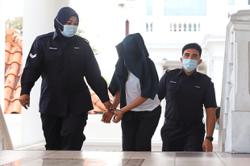