The fatalities were reported in Sibu, bringing the total number of deaths in the state to 28.

The 27th death was from case 2,963, a 53-year old local woman from the Pasai cluster, who was referred to Sibu Hospital on Wednesday (Jan 20) due to shortness of breath.

She was under intubation at the hospital but died on the same day.

The state disaster management committee said in its daily report that an rRT-PCR test was done on the woman on Thursday (Jan 21) that came back positive for Covid-19.

She had a history of diabetes, high blood pressure and kidney failure.

"The 28th death involved a 91-year local man who was referred to the Sibu Hospital from a daycare centre on Jan 16 as he had a cough and fever.

"He also tested positive for the virus on Jan 21,” said the committee in a statement.

The committee added that the patient was also from the Pasai cluster and passed away on Saturday (Jan 23).

It said he had a history of high blood pressure, suffered a heart attack and stroke.

Out of the 71 cases in Sibu, 42 were from the Pasai cluster while the rest were from individual screenings at private medical centres.

In Miri, 25 of the 57 cases were from from individual screenings at medical centres while 21 were detected from the Rakut cluster.

Six were from the Jelita cluster, three were from the Pasai cluster while one case was from the Bah Sayap cluster and another linked to a case in Kanowit.

Meanwhile, 30 cases in Kanowit and 27 in Song were from the Pasai cluster.

At the same time, a total of 107 cases had recovered statewide with 96 in Sibu, six in Miri and five at the Sarawak General Hospital.

A total of 1,647 patients are still being treated at hospitals statewide. 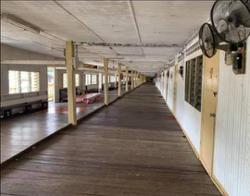