Opposition's legal bid is not against Emergency but to get Parliament to proceed, says Anwar

PETALING JAYA: The Opposition's legal challenge is not against the Emergency proclamation but to allow Parliament to go on, said Opposition leader Datuk Seri Anwar Ibrahim (pic).

The PKR president said the Opposition's legal team will be filing the court papers within the next two days.

"What we are putting forth to the court is not against the Emergency proclamation but the need to continue with Parliament meetings. This can be raised in court without questioning the proclamation," Anwar said at a virtual press conference on Wednesday (Jan 20).

He added that there is a constitutional basis for Parliament to continue despite an Emergency proclamation under Article 150 of the Federal Constitution.

Parliament should be allowed to convene, he said, adding that it is the best avenue for the rakyat to voice their concerns, particularly with regard to the Covid-19 pandemic.

"Some people are saying that kindergartens and other businesses can open, why not Parliament.

We do not want to see an opportunity for the emergency powers to be simply used without any check and balance," he said.

Anwar also claimed that more than a majority of MPs - including several government backbenchers - have written appeal letters to the Yang di-Pertuan Agong to review his proclamation.

"This shows that we are able to work together to form a stable administration for the good of the rakyat," he said.

Anwar also rubbished claims by some quarters who said that the move to submit the letters is tantamount to treason.

"It is not protesting but merely appealing to the King to use his goodwill and wisdom to review the proclamation," he said.

On Tuesday (Jan 12), the King had decreed for the Emergency until Aug 1 or earlier if the number of Covid-19 cases can be effectively cut down and controlled.

Last week, Anwar announced that the Opposition intended to legally challenge the Emergency proclamation while also calling on MPs to appeal to the King to review his decision.

Meanwhile, Anwar took a swipe at the government's delay in rolling out the Covid-19 vaccination programme.

"Some neighbouring countries such as Singapore and Indonesia have already started theirs yet we are still lagging behind," he said.

He urged the government to be more transparent and not keep the public in the dark over the matter. 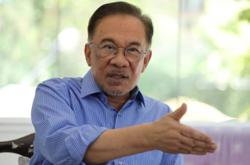