KUALA LUMPUR (Bernama): The flood situation in Sarawak and Pahang shows signs of improving with a drop in the number of victims still at the relief centres Wednesday (Jan 20) morning.

However, in Sabah, there is not much change in the flood situation. The number of evacuees at the relief centres remained the same as at Tuesday (Jan 19) night.

In SARAWAK, the number of flood victims dropped slightly to 309 people Wednesday morning from 325 Tuesday.

According to a report by the Sarawak Disaster Management Committee (JPBN), all the flood victims are at the relief centre at SK Tanah Puteh, Serian, the only relief centre still operating in the state.

In PAHANG, the number of flood victims who are still in four relief centres in Kuantan and Pekan Wednesday had dropped to 422 people from 118 families, compared to 509 people Tuesday afternoon, according to the Social Welfare Department’s Info Bencana portal.

A total of 337 flood victims in Kuantan are being accommodated at the relief centre at Dewan Melati of the Penor Prison, and SK Bunut Rendang, while in Pekan, the two relief centres still operating are SK Temai and Dewan PKB Padang Rumbia, involving 85 victims.

The infobanjir.water.gov.my portal reported that the water in Sungai Jelai in Lipis is still above the danger level, although the situation in the state, following the floods which started on Jan 3, has almost recovered.

Meanwhile, in SABAH, the number of flood victims remained at 791 people from 227 families at 13 relief centres as at Wednesday morning.

"Some of the areas involved are still experiencing rain and strong winds," it said.

So far, the floods in Sabah have caused 53 roads to be under water and landslides in seven districts including Pitas, Kota Kinabalu, Kota Marudu and Kudat. - Bernama 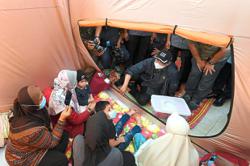