A MAN won a car after taming 18 bulls in a traditional sport known as “Jallikattu” in Tamil Nadu, India, according to a report by Makkal Osai.

The bull taming competition, which is hugely popular in Tamil Nadu, was banned by the Indian Supreme Court in 2016 after campaigns by animal rights activists.

However, since 2017, such Jallikkattu competitions have been permitted as a cultural sport.

The competitions are now held under strict rules to ensure the animals’ welfare and monitoring by state officials.

The competition was held in Madurai in conjunction with the Ponggal festival last week.

There were a total of 674 specially bred bulls pitted against 545 men trying to tame them with nothing but their bare hands.

A local resident who was identified as Karthi managed to bring under control an astounding total of 18 bulls, beating out Prabakaran, who tamed 17 bulls and bagged second place.

About 30 participants suffered minor injuries. None of the bulls were reported to be injured. 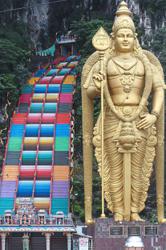