KOTA KINABALU: Sabah remains on high alert for flooding on Monday (Jan 18) after a weekend of heavy rain caused damage to roads, property and crops as well as flooding and landslides in nine districts.

A total of 691 people from 203 families in 223 villages remain at 15 relief centres at the affected districts even as flooding shows signs of receding.

However, water levels have risen again at some of the nine districts, with rain expected to continue until Tuesday (Jan 19).

As of last Sunday (Jan 17), the Sabah Disaster Management Committee said that there were 26 roads affected, including 10 roads affected by landslides.

It added that many of the roads are in the Penampang district, which is the worst-hit, and there were landslides along the main roads on the Crocker Range linking the state capital with the interior regions of Sabah.

Some sections of roads in northern Kudat and Pitas as well as Tuaran district and Kota Belud were also affected by floods, while landslides were reported along roads in Kota Kinabalu, Kota Marudu, Pitas, and Kudat.

The Civil Defence Force has said that they are still on alert as weather conditions remain unpredictable even as water levels recede, as more rain forecast for Monday could see flood waters rising again.

Additionally, at around 9am Monday, firemen responded to a call where a car parked along at an eco-farm at Signal Hill here tumbled 30m down a ravine after a landslip, though there were no casualties.

Meanwhile, Chief Minister Datuk Seri Hajiji Noor called on the people to heed instructions to move to evacuation centres if the need arises.

He said this when visiting some flood-hit areas in his constituency of Sulaman in Tuaran as well as Penampang on Sunday.

He said the Public Works Department and the respective road maintenance concessionaires have been directed to take necessary steps to put warning signs along roads affected, including the Penampang-Tambunan road that saw a major cave-in.

Sabah PWD is also carrying out urgent investigations on the Luyang flyover here, which is said to be suffering from structural cracks after it was opened about two years ago.

PWD director Ahmad Ali said that an investigation is underway and safety measures have already been put in place.

For Penampang, which has been badly hit this time around, residents who saw two waves of floods in one-day on Sunday were bracing for more bad weather, even as they started to clean up.

Kapayan assemblyman Jannie Lasimbang said various areas including Kg Peringatan, Kobusak, Tunoh and Hunga as well as housing areas such as Taman Sahabat, Regency Park and Millenium Heights in Bundusan within her constituency in Penampang district were badly flooded.

"There were also areas in Kg Koidupan that also experienced landslides, and many roads were flooded and impassable," she said.

Many blame the long-delayed flood mitigation programme for Penampang and blocked drains as among key reasons why the district is constantly hit by floods during heavy downpours. 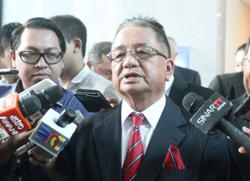