ISKANDAR PUTERI: The Malaysia Quarantine and Inspection Services (Maqis) has foiled an attempt to smuggle RM17,000 worth of dried chrysanthemum flowers into the country via the Second Link here.

Johor Maqis director Nur Afifah A. Rahman said a lorry was detained at the import lane at the Sultan Abu Bakar Complex (KSAB) at around 4pm on Sunday (Jan 17).

“Further inspection found 320kg of chrysanthemum flowers hidden inside 40 boxes in the lorry.

She added that investigations also revealed the consignment did not have any valid documents such as an import permit and a treatment certificate from the country of origin.

Nur Afifah said that any attempt to import any agricultural product without the import permit from Maqis is an offence under Section 11(1) of the Malaysia Quarantine and Inspection Services 2011 (Act 728).

She added that a person could be fined not more than RM100,000 or jailed for a period not exceeding six years, or both if convicted under the Act.

The lorry driver was released after the department recorded his statement. 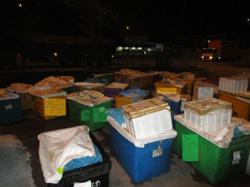