PUTRAJAYA: Kelantan and Sibu will be placed under the movement control order after a spike in Covid-19 cases was recorded in these two places in the past two weeks.

The MCO will be enforced from today, with the order in Kelantan to be until Jan 26 while MCO in Sibu is until Jan 29.

Kelantan was previously under the conditional MCO while Sibu, together with the rest of Sarawak, was under the recovery MCO.

As of Jan 14, the cumulative figure of positive cases recorded was 1,649.

Ismail Sabri said since Jan 10, the average daily cases went up to between 80 and 100 cases and that 90% of the districts in Kelantan – Kota Baru, Bachok, Tumpat, Gua Musang, Machang, Kuala Krai and Tanah Merah – were now red zones.

“Following advice and risk assessment by the Health Ministry, the National Security Council (NSC) had agreed to place Kelantan under MCO, ” he said in his media briefing yesterday.

Ismail Sabri said between Dec 31 and Jan 13, health authorities saw the number of positive cases in the division climb from only two to 251.

The majority of the cases, he said, were from the Pasai cluster, which recorded 394 cases and involved 18 longhouses in different locations within Sibu.

“The NSC had agreed to place Sibu under MCO. All standard operating procedure under MCO is to be followed by the people in Kelantan as well as Sibu, ” he added.

On another matter, Ismail Sabri said that optometrists could now operate after their appeal to the government was heard and approved.He said the Domestic Trade and Consumer Affairs Ministry had allowed this after it was satisfied with the proposed SOP presented by the stakeholders.

“The ministry has agreed to allow for these businesses to operate provided the strict SOP they proposed is followed.

“If they are caught not complying with the SOP, these business premises will be closed, ” he said.

The Association of Malaysia Optometrists president, Ahmad Fadhullah Fuzai, had appealed to the government to allow private practice optometrists, as well as optical shops, to reopen.

The Malaysia Association of Practising Opticians had also made similar calls, saying that 30% of the people needed spectacles, especially frontliners battling Covid-19.

Meanwhile, Ismail Sabri said hair salons and barbers would have to wait a while before any decision was made whether to allow them to resume business.

“We will review this after two weeks. We need to look into this carefully because this business involves physical contact, ” he said, pointing out that this business was among the last that the government had allowed to reopen when the MCO was enforced last year.

Ismail Sabri also said that students sitting for examinations and returning to campuses or hostels were not required to do a swab test unless they showed symptoms.

He said there had been suggestions, including from several states, that students undergo screen tests before returning to campuses and hostels and that the cost for the tests be borne by the students.

“The NSC decided that there is no need to make swab tests mandatory for students sitting for exams or for those returning to campuses and hostels. However, if they have any symptoms, then they will be required to do so, ” he added.

Ismail Sabri was earlier asked to clarify reports saying that certain educational institutions required their students to undergo a screening before they could sit for an exam or return to campus, with the cost to be borne by the students. 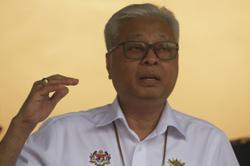