PASIR GUDANG: A welder was killed while two others were injured when a tank containing crude glycerine exploded at a factory in Tanjung Langsat here.

Johor Fire and Rescue Department deputy director Pauzan Ahmad said that they received a call about a fire in the factory at 2.41pm and deployed 27 personnel to the scene.

"Upon arriving, we found that there was no fire but a 15m-tall tank had exploded while welding work was being done.

"There were about 800 tonnes of crude glycerin in the tank when it exploded," he said, adding that it had a capacity of 1,000 tonnes.

He said that deceased was 45 years old while the two injured were 23 and 42. 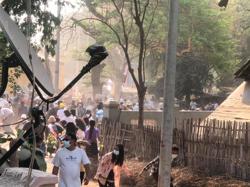