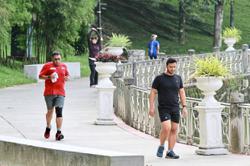 PETALING JAYA: The decision on whether to allow parks and hiking trails here to remain open during the movement control order will be made on Wednesday (Jan 13) evening, says mayor Datuk Mohd Sayuthi Bakar (pic).

“The standard operating procedure is not clear and we do not want to rush into matters. I will be attending a meeting at the Selangor State Secretariat about 5pm to iron out matters such as this, ” he said.

Mohd Sayuthi said that there was an announcement that the public could still go jogging and we are assuming it would be at the neighbourhood parks.

“However the details on where the public could jog or cycle is not clear. Of course, we intend to close parks and hiking spots such as Bukit Gasing but we want to be certain about the procedures first, ” he said.

Earlier on Wednesday, Kuala Lumpur City Hall (DBKL) announced that all public parks and playgrounds under its jurisdiction will be closed starting Wednesday until further notice.

DBKL said in a statement that the closure was in view of the MCO announced by the government.

Some of the parks that will be closed include Taman Rimba Kiara, Taman Botani Perdana and Taman Metropolitan Kepong.

The closure comes despite some flexibility given for leisure activities including jogging and cycling as announced by Senior Minister Datuk Seri Ismail Sabri Yaakob Ismail on Tuesday (Jan 12).