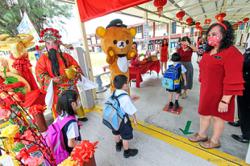 THE National Union of Heads of Schools has urged the Education Ministry to allow headmasters to be given autonomy to open their schools in stages, reported China Press.

In an interview, the union’s newly appointed president Lim Bee Khim said she hoped that Year One pupils would be given priority to attend school to get used to the new environment.

“As schools are not allowed to hold welcoming days for our new pupils, they would not have time to get to know the school, the teachers, their classmates, their classrooms and even their seating.

“They’ve never experienced this before, ” she said.

Lim, who is the headmistress of SJK(C) Taman Connaught, said coupled with the new Covid-19 prevention measures, the first few days could be overwhelming for the

seven-year-olds, especially since parents were not allowed to enter schools during the movement control order.

She suggested that Year Two to Year Six pupils start the new school term by attending online classes and returning to school in stages.

> Sin Chew Daily reported that Taiwanese superstar Show Lo had announced his comeback to the entertainment scene after nearly a year of keeping a low profile.

The scandal-hit singer-actor made the announcement during a livestream on Douyin (Chinese version of TikTok) on Friday.

Lo was heard yelling “I’m back!” before announcing that he would be updating his social media accounts regularly after laying low for so long.

Last year, Lo’s ex-girlfriend Grace Chow made an explosive social media post accusing him of sleeping with female artistes under his wing.

He also lost his job hosting Chinese variety shows such as Go Fighting! and CHUANG2020. Air quality unhealthy in three Selangor areas
Cops detain another five over fracas at Brickfields eatery
Cops: Search conducted at residence in viral video lawful
Queue jumpers can be fined
Nailing the VVIP drug lords
‘It’s about striking a balance’
Muhyiddin gets interim injunction against Puad
‘Economic recovery a priority’
Government tested in the Covid-19 crucible
Muhyiddin: It’s up to the people to decide on next govt