Authorities carrying out the operation in North Seberang Prai.

GEORGE TOWN: A total of 27 individuals were fined RM1,000 each for violating the recovery movement control order (MCO).

George Town OCPD Asst Comm Soffian Santong said they conducted an integrated crime prevention operation on New Year's Eve that was conducted between 10pm on Dec 31, 2020 until 3am on Jan 1, 2021.

He said the individuals fined were men in their 20s and 30s, who were not complying with standard operating procedures (SOP) mandated by the government.

"They were fined at several places in the district during the operation involving 211 personnel from George Town police headquarters, state health department and Penang Island City Council," he said in a statement on Friday (Jan 1).

ACP Soffian said the individuals were fined because they did not register their details when entering homestay bungalows in Batu Feringghi.

ACP Soffian Santong said among the areas that were checked during the operation were bars and restaurants, homestays and night markets in Batu Feringghi.

He added that 880 individuals, 165 vehicles and 61 bars and restaurants were checked in the five-hour operation.

He said a total of nine premises were compounded by MBPP for various offences.

"MBPP also ordered six premises to shut down for failure to comply with the SOP," he said.

In North Seberang Prai, a total of 26 individuals including six women were fined RM 1000 each for not complying with SOP during the recovery MCO.

North Seberang Prai OCPD Asst Comm Noorzainy Mohd Noor said the individuals, aged from 17 to 42, were fined during an operation that was conducted on New Year's Eve at several places in the district.

"They were fined for not adhering to physical distancing rules and for not wearing facemasks at public areas," he said.

ACP Noorzainy said during the six-hour operation, police also checked 469 vehicles during a roadblock mounted at the Butterworth Outer Ring Road in Bagan Ajam and issued 21 summonses for motorists for various offences.

He said a total of 606 individuals were checked by police during the operation. 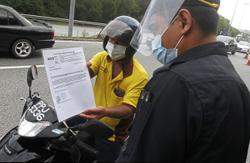