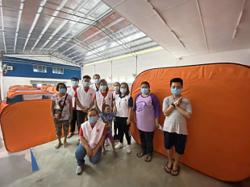 Third day of floods in Bintulu district in northern Sarawak. -Pic by residents

As of noon, 272 flood evacuees are still being given shelter at two flood relief centres in the northern Sarawak district.

They were evacuated from the squatter colonies along Sg Plan and Sg Sebatang and from houses in Kidurong Avenue housing estate on Saturday (Nov 28).

Sarawak is facing the onslaught of the landas season that is entering its peak period.

The landas is the equivalent of the monsoon in the east coast of the peninsula.

It brings torrential rain that can cause severe floods.