"We checked 93 locals and 77 foreigners during our visits.

"Checks on the outlets' entertainment licences also revealed that they all had valid licenses issued by Kuala Lumpur City Hall (DBKL)," he said on Saturday (Nov 28).

He said they issued compounds to 88 locals for violations of Rule 11 of the Prevention and Control of Infectious Diseases Regulations 2020.

"We also arrested 10 foreigners for not having proper documentation while 67 others were detained for suspicion of having fake travel documents," he said.

ACP Zainal warned the public, foreigners and premises owners to adhere to the conditional MCO.

He said failure to obey the orders could lead to action under the Prevention and Control of Infectious Diseases Regulations 2020 and other available laws.

Those with information on crime or similar activities can contact the police hotline at 03-2115 9999. 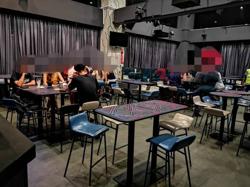