By GC TAN and IMRAN HILMY

KANGAR: Eighteen men, including three Thais, have been detained over the fatal shootout between two General Operations Forces personnel and two groups of smugglers along the border with Thailand in Padang Besar, killing one of the policemen.

She said she had sought help from the Songkhla police chief to bring the three Thai suspects, arrested in Thailand earlier, back to Malaysia for further action.

It was earlier reported that the GOF personnel who died in the gunfight was Kpl Baharuddin Ramli, 54, while his partner, Kpl Norihan Tari, 39, was seriously injured.

Early investigations showed that two men were carrying out intelligence work along the border wall in Padang Besar called TS9 at 3am on Tuesday.

They were beset by two groups of Thai smugglers and a shootout took place.

Of the 13, three of them were picked up in Thailand while another two were arrested in Malaysia.

At a press conference yesterday, SAC Surina said they picked up another Thai national, the sixth suspect, nearby the crime scene during a “sweeping” operation.

SAC Surina said police had also recovered eight bullet shells and two live bullets that were used by Kpl Baharuddin at the scene.

In a phone interview earlier, SAC Surina said the area where the GOF Bidor personnel were conducting security patrol was under Ops Benteng, an operation aimed at preventing the entry of illegal immigrants during the movement control order.

SAC Surina said the smugglers could have resorted to gun violence out of desperation, as cross-border smuggling activities were disrupted due to border closure and Ops Benteng.

“They were desperate to smuggle goods into the neighbouring country during the MCO, ” she said.

At the Kangar Court earlier, the 18 people, including three Thai nationals, were remanded in connection with the shootout and ketum smuggling activities at the border.

The three Thai nationals and 15 locals were remanded for seven and four days respectively.

The remand order for the suspects aged between 19 and 37 were issued by Kangar Court Registrar Monica Joseph Gaisah yesterday. 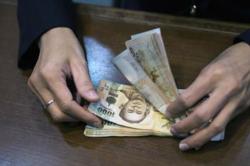