NIBONG TEBAL: Some 80 bus operators are pleading for the government to have their loan repayment moratorium extended, hopefully by two years.

Northern Tour Bus Operators Coalition chief Ahmad Ruslan Abdul Latiff said as bus drivers have lost their income amidt the Covid-19 pandemic and movement restriction orders, many have exhausted their savings and are at the verge of bankruptcy.

"Many operators have sold off their buses after being served legal letters from credit companies for failing to settle their loans since March.

"Some operators are spending over RM10,000 a month to finance each bus' installments, insurance and maintenance despite having few customers.

"We intend to service our loans and do not blame credit companies which are just running their business, but without money, we hope the government can do something," he said.

"We will pay up when the situation improves, we will definitely pay up.

"While some experts believe the situation will only improve in four years, we hope the industry will recover within two years," he said when met outside the state stadium in Batu Kawan on Monday (Nov 23).

At the stadium, over 20 buses were parked at the parking lots to appeal for the government's help.

Ahmad Ruslan said with voting for Budget 2021 slated on Nov 26, the operators hope something positive will come out from it.

"We urge Housing and Local Government Minister Zuraida Kamaruddin to hear our plight and do something since the credit companies come under the purview of the ministry," he claimed.

He said the group's request was for the government to take over debts raked up by bus operators when they bought buses through credit companies.

Bus driver S. Jegajeew, 40, said he still has loans for four out of his 13 buses to settle.

"I recently renewed the insurance for a bus for RM13,000 but the conditional movement control order (MCO) was imposed right after that.

"Few days ago, I received a legal letter from a credit company to haul me to court as I've failed to settle the repayment since March which is charging me with 8% interest," he said.

On Nov 11, they had lodged a police report against five ministries, complaining that the ministries had ignored the fate of tour bus operators affected by the pandemic. 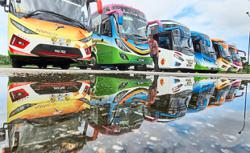