KOTA KINABALU: Police here have begun their investigation into the death of a 56-year-old man whose body was found along the Kota Kinabalu-Beaufort railway line on Saturday (Nov 22).

He said the victim suffered severe neck and chest injuries and was believed to have been hit by a train.

DSP Azmir said the 47-year-old driver of the train on the line earlier was unaware of hitting any person along the railway track until the Beaufort station master informed him that a body had been found near the Holagilat station.

DSP Azmir said investigations showed that the train driver had left Beaufort station for Holagilat at 1.30pm and dropped off passengers before making the return leg at around 3pm.

“At about 4pm, while he was on his back to his house after work, the Beaufort station master informed him that a body had been found on the tracks near Holagilat.

“The train driver told police that he did not see anyone on the tracks during his trip to Holagilat and back, ” DSP Azmir said.

He said another railway driver, Binjod Boilil, who was driving the smaller Sharvo train from Holagilat to Beaufort spotted dogs around the body on the tracks and immediately informed the station.

A police report was lodged at 5.15pm on Saturday.

He said police were investigating the case as a rail accident but did not rule out other possibilities. 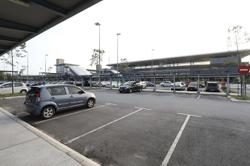